When vinyl windows were first introduced in the U.S., frame material consisted of hollow vinyl extrusions -- also known as lineals -- with either a single chamber or a single chamber divided into two parts. It's true that these early vinyl windows had some issues. The single-chamber construction created a convection current, moving colder air to the warmer wall of the window frame and--just like an aluminum frame--creating condensation and a cold indoor window frame.

The single-chamber design also lacked structural strength. It bowed when pushed by the wind, causing both air and water leakage.

Times have changed and vinyl lineals are now constructed with multiple chambers, making them structurally sound and energy-efficient. 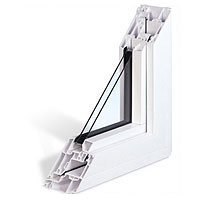 Other design advancements over the years have further improved the strength of vinyl windows. Welding the corners of the frame and shaping the extrusions to allow for steel inserts both provide additional support and increased wind resistance, enough to allow mulling (combining a series of windows into one large window without brick or siding in between for added strength.)

Don't pay attention to anyone who tries to tell you vinyl replacement windows can't cut it. Vinyl is definitely one tough contender.