A Vine-Covered Cottage with Pastoral Windows Tugs at the Heartstrings 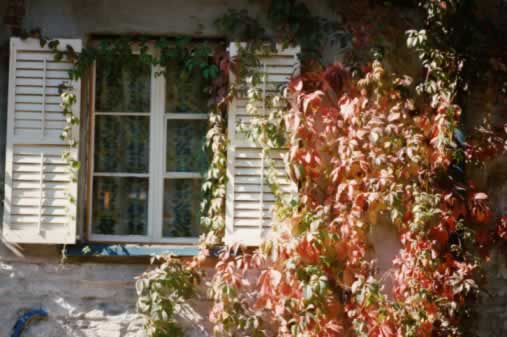 Just imagine the broader setting that includes this pastoral window wall: A narrow country road meandering among green hills, a little kitchen garden where beans and carrots and hollyhocks thrive, and a slightly bent man in a weathered wool sweater smoking his pipe on the front step. If you long for the romance and simplicity of life in an ivy-covered cottage, it probably exists behind these tri-paned casement windows with their shutters painted in a weathered red, white, and blue color scheme. The whitewashed brick wall supports ivy vines in autumn dress, which may be trimmed soon so the shutters can be closed against winter's chills. They'll be flung open on any sunny day, to let in whatever warmth the sun can occasionally impart in a moisture-laden climate. Now imagine being on the other side of these windows, taking in the view each pane frames.