Perhaps the most annoying problem that can occur in windows, especially in colder climates, is condensation. Each time the temperature drops outside, water vapor condenses on the inside surface of glass and drips over the sash and onto the sill. Over time, especially on wood windows, this moisture can destroy the inside finish of the window, eventually discoloring it beyond repair.

In extreme cases over longer periods of time, this moisture can rot the wood and even cause de-glazing of the sash. In addition to defacing the finish, Condensation can warp the wood, and cause ice buildup, freezing the windows shut making their operation all but impossible. 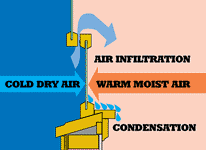 Can condensation be prevented?

Condensation can't be prevented in principle, but it can be controlled two ways:

Vinyl replacement windows will allow you to best resist condensation conditions. Then by keeping the moisture levels as low as possible, you will be able to control condensation so it is no longer a problem.

In This Section
Popular Window Articles
Door and Window