Does your new home meet the new Energy Star ratings?

The newest Energy Star requirements -- version 6.0 if you're counting -- went into effect on the first day of 2015 for homes in the north central, south central, and south zones of Energy Star's climate map. The northern zone will go into effect January 1, 2016.

However, I've found that in several cases the new regulations are not being followed. Some builders and homeowners are still working on the old Energy Star requirements. Let's take a look at the official chart. 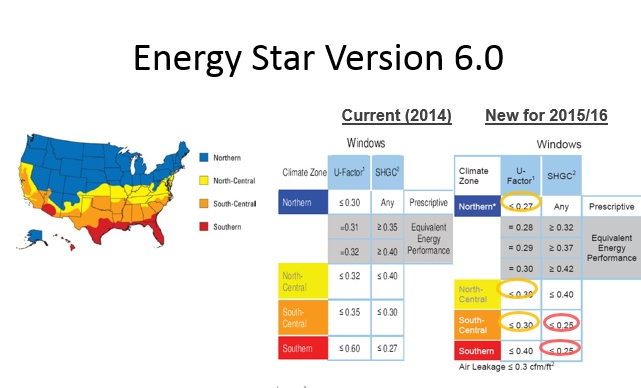 As you can see above, the 2014 (version 5.0) requirements are different from the new version 6.0 requirements. Remember, lower numbers mean better efficiency when it comes to things like insulation and how well your windows and doors keep in the air you want and keep out the temps you don't want. So those lower numbers for version 6.0 indicate higher standards.

Now, let's say you're looking for a new home. You may see many that note they meet Energy Star requirements. Your very next question should be, "For which year?" Well, here's how you can tell.

Energy Star appliances have yellow tags. So as an example, let's say the windows have a National Fenestration Ratings Council (NFRC) label and an Energy Star zone map. The inference here is that the windows are Energy Star rated. Why not believe it? The house says it, the label infers it is

But the evidence that it is or is not Energy Star rated is right there on the NFRC Label.

The left middle numbers refer to the Solar Heat Gain Coefficient (SHGC). That refers to the energy of the sun passing through the glass. Again, it has to be the same as or lower than the chart.

How significant are the lower u-values and SHGC? If the difference is small, they have little effect to your heating and cooling bills. So if you have windows with a .35 u-value and get windows with a .30 u-value, you'll see impact on energy costs.

The difference comes when selling the home. Selling an Energy Star home is easier than selling a non-Energy Star home. The perceived value is higher. Loaning institutions also have put a value on Energy Star homes, so borrowing money to buy one might be easier. Some utility companies even give rate reductions to energy Star Homes.