The three little pigs' tale aside, neither bricks nor the sticks are the real reason the big bad wolf can blow your house down. The primary reason a house collapses in a storm is that the windows break, causing the air pressure inside the house to increase. The increased pressure lifts the roof off, and then the walls fall down. To prevent a house from collapsing, the glass in the windows must remain intact.

If you live close to a coastal region - particularly a place where hurricanes could damage your home - consider replacing your windows with impact windows, also known as hurricane windows. They are designed to resist penetration from the impact of flying debris.

After the devastating damage Hurricane Andrew caused in 1992, the Florida Building Commission began adapting their building code to limit property destruction from hurricanes. This prompted a change in the building codes for all coastal areas. One of the provisions of the Florida code required windows not to break from the impact of debris. 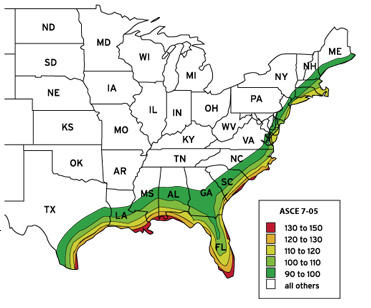 Wind debris zones have since been established for certain coastal regions, and each zone is divided into areas according to the potential speed of damaging winds. The higher the wind speed, the stronger the windows needed - and in some cases required - for that area.

Similar to your car's windshield, impact windows are made with a layer of vinyl, laminated between two pieces of glass. 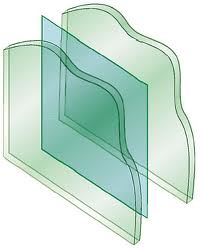 The laminate keeps the glass intact when it's struck. While vinyl laminate in a windshield is .015" thick, the vinyl laminate used in hurricane windows is .09" thick - six times thicker than a car windshield. If broken, laminated glass remains in its frame, reducing flying glass and risks to people both inside and outside a structure.

Design and testing of impact windows

To design hurricane windows, the glass is tested for impact-resistance as well as increasing pressure. In a small missile test, steel balls weighing two grams each are shot at the glass at 80 feet per second to determine whether the window can withstand an impact of small debris in 110 to 120 mph winds. A large missile test involves shooting a nine-foot 2-by-4 at the glass at 50 feet per second. In both tests the window must survive these impacts without evidence of penetration.

Further testing involves subjecting the windows to increasing amounts of pressure from both inside and outside to simulate potential wind conditions in a hurricane. After several hours, the window must not show any tears in the laminate.

Taking the precaution of installing impact windows and protecting walls and doors if you live in a wind debris zone can greatly improve your home 's chances of surviving a hurricane or other major storm. That way, even if the big bad wolf coughs up a 2-by-4, he still can't blow your house down.