Shutters: an alternative to closing your windows

Once upon a time when windows were just holes in the wall to let in air and light, shutters were the only means of closing them. But when they were closed, your house was not only protected, but dark and airless. Then came glass and moveable sash. You could open and close the windows by moving the sash up and down or in and out, all the while having a clear view outside. With glass in the windows, the only difference between a closed and opened window was the absence or presence of airflow.

Shutters fell into disuse or became vestiges of a time gone by. You still see them, but most are decorative only. Anyone who wants to keep light out of the house uses an indoor window treatment like blinds, shades, drapes or interior shutters. And if they want to keep weather out, they close the windows. But if you want to keep the windows actually protected from outside elements while leaving them open for airflow, is there a shutter that can do it?

I recently had a customer with that very request. Her home's bedrooms faced west and the summer sun moving from south to west in the late afternoon was brutal. Besides being blindingly bright, it was heating up the house beyond what her air-conditioning could handle.

Traditional wood shutters, one on each side of the window, were not the answer. When they are closed no air and no light at all can enter. The room is dark, unless they are louvered. The solution was Bahama shutters that can provide shelter from the elements while allowing control of light and airflow. 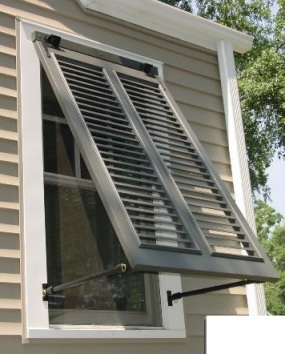 Bahama shutters are hinged at the top and can be positioned fully open or partially closed. They can block the sun while allowing visibility to the outside. And the window can even remain open when it is raining without any but the most windblown rain from touching the window.

Are your shutters for looks only or would you like them to actually do something? You might consider real shutters. They can provide both looks and protection.